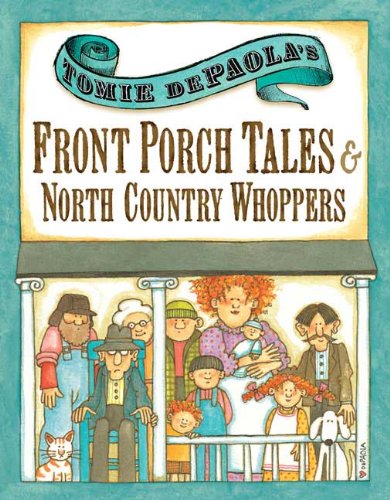 DePaola (the 26 Fairmount Avenue series) has frequently mined his childhood to create memorable tales; here he taps into his 35-year-plus residency in northern New Hampshire. Organized by seasons, these homespun vignettes are flavored with a North Country accent, but they feature dePaola’s characteristically folksy pictures. The cast, mostly amiable, includes a few comically ornery locals, among them a soap-shunning fella whose ripe aroma sends a family of skunks scampering. Elsewhere, a “big-boned” gal related to the Bunyans meets her husband while working as a cook in a loggin’ camp, where she makes flapjacks for the “lumbahjacks” on a griddle fashioned from an old saw blade; and a friendly man invites two unsuspecting newcomers to “set” with him and his wife on Saturday evenin’ after suppah, a pastime that, apparently, entails sitting silently while listening to the tickin’ of the clock, the cracklin’ of the stove and the sizzlin’ of doughnuts frying. This last scenario, where the wide-eyed guests have no idea what they are in for nor how to react to the settin’ session, epitomizes the volume’s wry humor (“Thanks fer coming,” their host tells the visitors the next time he sees them. “Maude and I was sayin’ that Saturday was one of the best sets we ever had”). Comics-style panels interspersed between sections lampoon tourists and locals; it’s hard to predict which camp will enjoy this sunny book more. All ages.