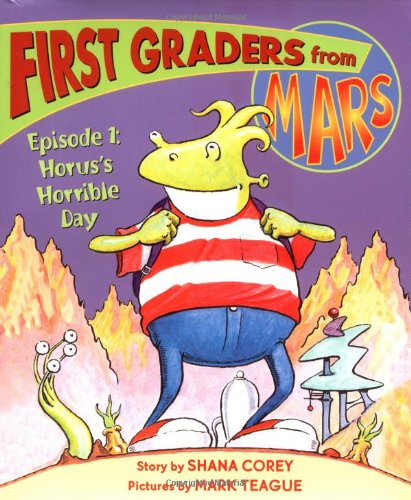 Young Martians start elementary school in this reassuring comedy, the debut of the First Graders from Mars series, in which the hero longs for the good old days of "martiangarten." Horus, a froggy-looking child with prehensile tentacles on his chartreuse head, becomes confused in his new classroom. "Where are the snooze mats? Where are the snacks?" he asks. "First graders are too big for those things," scoffs a reptilian girl with lilac hair. Horus's pink-and-green-spotted teacher (who "had eyes in the back of her head. And in the front. And on the sides") purses her lips with concern. Corey () believably depicts Horus's embarrassment and his conflict with his mother, who literally drags him to school the next day. While the author doesn't examine Horus's confident classmates, she shows how Horus encourages another scared student to be brave. Teague () sets the action amid a Seussian landscape of spiky mountains, purple volcanoes and green anemone with eyeballs on their stalks. His bug-eyed, rubbery-limbed aliens perform familiar tasks in comical ways (Horus reads upside-down, balancing on his own face). Like Dan Yaccarino's , this universal drama takes a shrewd but optimistic look at first grade. Ages 5-7.