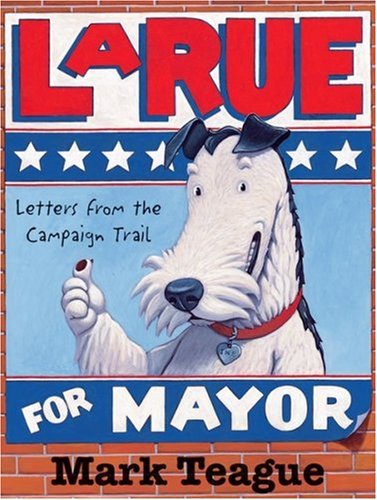 LaRue for Mayor: Letters from the Campaign Trail

It may be a presidential election year, but for Ike, Teague's ( ) letter-writing, louche canine hero, all politics is local. The police chief of Snort City is running for mayor on a law-and-order, antidog platform, and with Mrs. LaRue laid up in the hospital (she inadvertently got between Ike's gang and a hot dog cart) it's up to Ike to counter with his own vision of change and hope—at least, that's his story in his letters to Mrs. LaRue, and he's sticking to it. As in the previous Ike books, black-and-white images depict Ike's considerably cleansed version of events, while full-color pictures on the same spread counter with the real story—which in this case is one of dirty tricks and scandalous behavior. The pictures aren't as visually sly as Teague's previous work in the series, but perhaps slapstick is the more befitting aesthetic, given the topic. The writing is as sharp and satiric as ever—in fact, Ike's mixture of self-pity and self-aggrandizement seem ripped from the headlines. “We will do our best to keep the campaign positive,” the candidate dog pledges to his incapacitated owner, “though I can't speak for my opponent, who appears to be vicious and unstable, if not insane.” Ages 4-8.