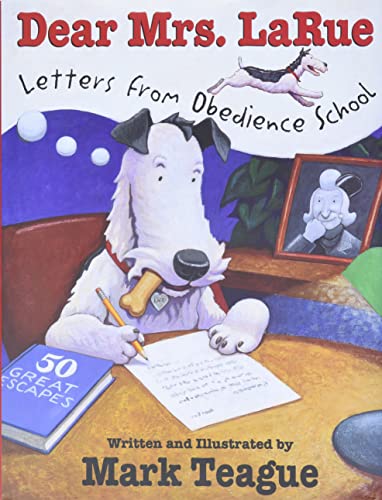 A dog's life is hardly to be envied if one believes the words of Ike, a rambunctious pooch sentenced to obedience school by his exasperated owner, Mrs. LaRue. Having repeatedly terrorized the neighbors' cats and snatched one snack too many from the kitchen counter, Ike finds himself enrolled at Igor Brotweiler Canine Academy. The hero begins a clever letter-writing campaign to Mrs. LaRue that paints a grim (and hopefully guilt-inducing) picture of his Brotweiler experience. But readers are privy to the hilarious truth. Teague () depicts the pampered pup at the spa-like academy in brightly colored vignettes, juxtaposed with black-and-white prison-like scenes that illustrate Ike's imagined hardship. He composes his correspondence with dramatic flair, whether describing his "inmate" experience ("The here are all caught up in this 'good dog, bad dog' thing") or reflecting on his misdeeds back at home ("Were the neighbors really complaining about my howling?... Let's recall that these are the same neighbors who are constantly waking up in the middle of the afternoon with their loud vacuuming").Throughout, the devilish laughs are in the details (waiters in white coats serving academy dogs gourmet meals and frozen drinks; Ike's images of a hard life in striped prison garb plus ball-and-chain). Even the duo's reunion (to much fanfare) plays off of an earlier joke. All in all, a tail-wagger of a book that will have readers howling with amusement. Ages 5-8.