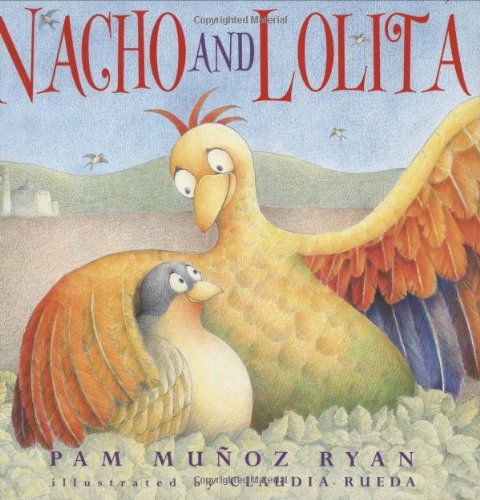 A sense of enchantment pervades this tender love story, which begins when a mysterious bird called a , arrives in the San Juan valley. Rueda ( ) depicts the gray-brown adobe town as dull in hue but elegant in its simplicity, a striking contrast to Nacho, who "carried the colors of the world in his feathers." The bird's magnificent appearance and "haunting" evening song, cause the villagers to speculate that the winged visitor is "a spirit from the past" or "a prophet of the future." But Nacho, although proud of his gifts, has a lonely heart: he is "the only for thousands of miles and hundreds of years." When (the swallows) arrive on St. Joseph's feast day, Nacho forms a strong attachment to one of them, Lolita, offering her one of his wondrous feathers (a gray feather grows back in its place) and when the swallow accepts it, "by the mystery of the ages, it became a blue hibiscus." Throughout the ensuing months, Nacho helps all the swallows build nests and gather food, and when it comes time to migrate, Nacho tries to fly south too, without success. "That night... Nacho's song ached with sadness. ' .' " Nacho then makes a great sacrifice in hopes of luring the swallows ("especially Lolita") back in the spring. Rueda's wordless spreads pay tribute to the enormity of Nacho's offering, which transforms the valley. Ages 4-8.