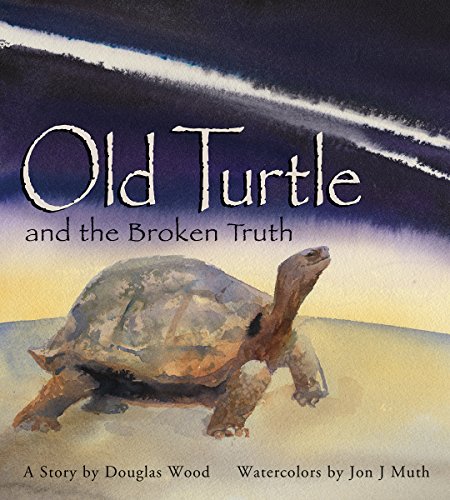 OLD TURTLE AND THE BROKEN TRUTH

In this handsome but overwrought sequel to Wood's (illus. by Cheng-Khee Chee), "a truth" falls from the sky and breaks in two. One half vanishes; the other (bearing the words "You Are Loved") is rejected by the animal kingdom because a part of it is missing." A human snaps it up and shares it with those "who spoke as he spoke and dressed as he dressed and whose faces looked like his." Eventually, the humans' faulty "Truth" inspires "anger toward those who were not like themselves," and war breaks out. Finally, a girl asks Old Turtle for help and returns to her people both with wisdom ("Every person, every being, is important, and... the world was made for each of us") and a special stone—the missing half of the broken truth. Repaired, the whole truth forms a golden heart, which reads, "You Are Loved and So Are They." Wood's fulsome prose ("She had... crossed the Mountains of Imagining and the River of Wondering Why, had found her way through the Forest of Finding Out") and heavy-handed message stand out in sharp contrast to the simplicity and subtle lyricism of Muth's ( ) semi-abstract watercolors. From his exquisite animal portraits to the saturated colors, striking interplay of light and shadow and dreamy, memorable images, the artist's work reflects a depth of emotion absent from the text. Ages 5-up.