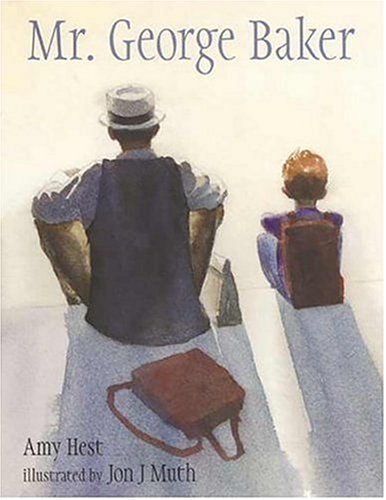 Hest (the Baby Duck books) and Muth ( ) eloquently capture a friendship between two neighbors in the span of a morning wait for the school bus. First grader Harry and Mr. George Baker ("He's a years old, no kidding," the boy claims), an African-American jazz drummer ("some people say he's famous"), share a special bond revealed through Harry's descriptive, first-person observations. "I really like his sweater,/ all hangy with three buttons./ It's chilly in the morning, and/ we both hug our knees./ And wait. We wait, watching/ leaves blow off trees." His youthful, sometimes lyrical narrative offers a peek into their understated relationship. "See his pants, all baggy, baggy, baggy?/ .../ There's candy in those pockets./ .../ George pops one in his mouth and I do too." But the biggest connection the two share is that they're both learning to read. Muth's soft watercolors maintain visual interest with varied perspectives of the same porch scene. In one, the pair sits similarly posed, arms crossed over knees, while another spread allows readers to peer out from the recesses of the porch, over their shoulders and identical book bags. With George's "crookedy fingers, going on his knees," Muth fluidly unveils a montage from a bygone era; a close-up of the man's large, dark hands fades downward into a nostalgic jazz club scene. When the bus finally arrives, both friends board, hand in hand. An upbeat, hopeful tale that speaks compellingly to intergenerational friendship. Ages 5-8.