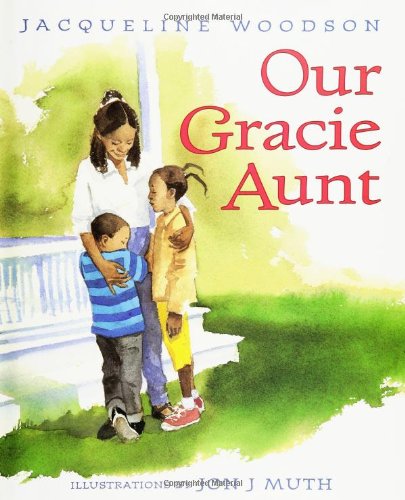 Woodson's () affecting story introduces a boy and girl seemingly abandoned by their mother. "Sometimes my mama went away for a day. Sometimes for a lot of days. That's how it was with our mama," says Johnson. A kind woman appears at the door, explaining that her job "is to make sure little kids get taken care of"; it sounds good to Johnson, but his more cynical older sister, Beebee, warns him the woman means foster care: "It's when you live with somebody that's not your mama." Eventually, the woman drives the siblings to their mother's sister, who is estranged from their mother. Aunt Gracie is as warm and welcoming as her clapboard house with its sprawling porch, flowerbeds and tire swing. Johnson is enchanted by the idyllic setting and by his aunt, who bakes cookies and tucks him in at bedtime, and even Beebee slowly warms up to her. After a visit to their apparently hospitalized mother, who assures them that Gracie will care for them until she is able to, the two return to Gracie's open arms. Muth's () spare paintings, often set as vignettes against a white background, effectively convey the children's sense of isolation and, later, belonging. Muth evokes the characters' emotions and supplies information that Woodson wisely omits from Johnson's narration (the emptiness of the apartment, with the children's spilled glasses and broken toy; the hospital setting). Because of Woodson and Muth's restraint, the rosy qualities of this tale do not impair its emotional truth. Ages 5-9.