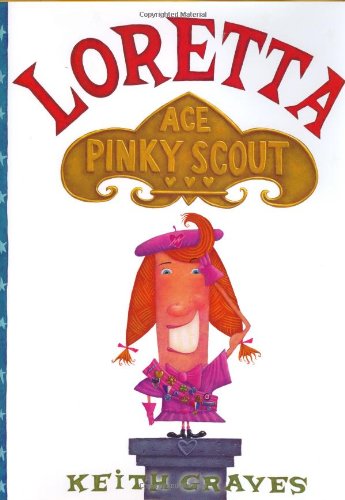 "All-around gung ho gal" Loretta measures her worth by the number of Pinky Scout merits she achieves. Her pink sash and lavender beret are studded with pins that attest to her accomplishments, and she "save[s] the world every Thursday." The only thing between Loretta and perfection is the Golden Marshmallow Badge, for which she practices faithfully. "Then the unthinkable happened. " During the official test, Loretta chars her marshmallows. She goes to weep in shame before a portrait of her four-star-general Gran, "the most perfect Pinky of all." In a twinkling, a vision of Gran appears (via her portrait) in a military-green vortex to console the overachiever: "Well, girlfriend, stinking is a part of life. Everyone stinks at something. Even me." Gran admits she never could knot a ribbon; her neat bow-tie is a clip-on. Graves () skewers Loretta for her marshmallow mania, and depicts her with licorice-thin arms, tiny army boots and a pageant contestant's pained smile. No (live) family members, troop leaders or other Pinky Scouts are in evidence, so Loretta seems friendless but for Gran and a portrait gallery of Pinkies. The nerdy scout has a valuable epiphany about talent, but will not rouse much sympathy from readers in this awkward blend of irony and earnestness. Ages 7-10.