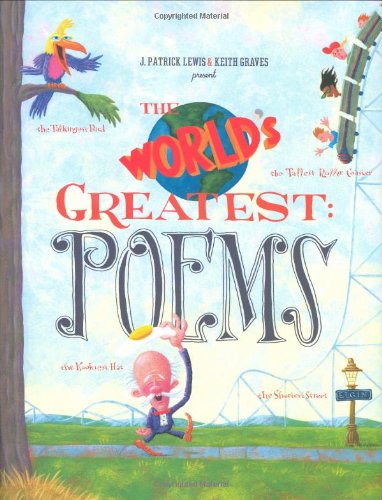 With a clever premise—poems about the world's greatest something or other—Lewis ( : ) and Graves ( ) assemble a poetry volume sure to appeal to assiduous readers of Guinness World Record books. Regrettably, the poems themselves are not always as intriguing as the oddball records they describe. Sometimes Lewis's meter stumbles, or his grasp on a particular topic weakens, but the poems often contain a sly rhyme or an idea that will grab the target audience, as in these words about an articulate canary that begins to “mutter, sputter/ Whenever he ate pnnnut bttttr.” Each poem lists the record associated with it; for example, “The Tallest Roller Coaster” is prefaced with the name, location and height of the actual attraction, after which Lewis describes the sensation of riding it (“You hold your breath,/ You lose your nerve,/ You're scared to death/ At every curve”). Graves's illustrations, like the best caricatures, match the wacky tone of the poems, as in “The Kookiest Hat” (“ 'A fried-egg hat repels the rain,'/ Was what the man replied,/ 'Because, my dear, I always wear/ It on the sunny side' ”). Ages 5-9.