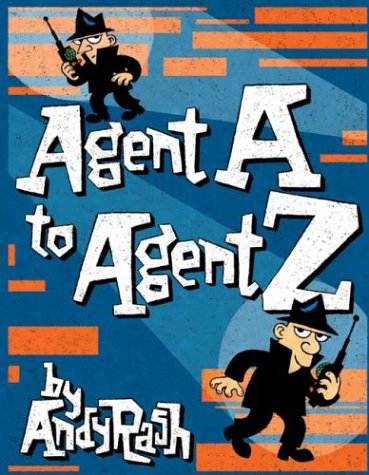 AGENT A TO AGENT Z

With Austin Powers, Maxwell Smart and magazine's Spy vs. Spy as his muses, Rash ( ) sends Agent A on a mission through the alphabet to find a mole. "Every spy who is official/uses words with his initial," the spymaster (who bears a striking resemblance to Edward G. Robinson) tells the hero. "But one spy is out of line./ I need to know his name by nine." Accordingly, Agent A tails Agent E, who "did not Expect/what happened when he pressed Eject," and eventually enters the Bond-like lair (the 1960s styling includes a round bed) of comely Agent S, who "Subdues a Spy/ by letting her Stiletto fly." It's a cool concept, especially for children who believe they've outgrown ABC books but find espionage enthralling. Rash's deadpan digital cartoons slyly spoof the undercover world as a place where the sun seldom shines and agents always dress in black and sport the same steely demeanor. At the same time, Rash celebrates the aura of menace, the top-secret intrigue, the neat-o equipment (a Jet pack, a tranquilizing dart). There's good fun here for any aspiring spy who's looking for a reason to come in from the cold. Ages 4-8.