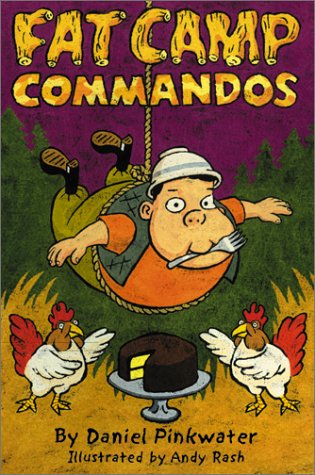 To protest their enrollment at a weight-loss camp, three children become pro-pudge activists, "terrorizing ordinary citizens to awaken them from their fat-prejudice." Narrator Ralph Nebula and his sister, Sylvia, hate squalid Camp Noo Yoo, where the owner and camp director, Dick Tator, makes dire predictions about their adulthood: "You live alone in a nasty little room because no one will marry a big fat tub like you." Ralph and Sylvia befriend "a little, round fatball of fury" named Mavis Goldfarb, escape Noo Yoo and hide out at Mavis's house while her parents are away. In between delicious meals cooked by a butler, they commit acts of civil disobedience, including mixing up the diet and dessert books at the store. "Being an outlaw and a fat-revolutionary felt good," says Ralph, pictured in a "Fat People Are Happier" T-shirt. Rash () contributes sly images that include a Charlie's Angels–style silhouette of the trio brandishing a candy bar and an eggbeater. Pinkwater's (; ) characters don't shrink from the cruel stereotypes directed at them, and they don't slim down at summer's end. Instead, they cite statistical evidence that diets don't work and thrill to a lecture by "Dr. Deepdip Cha-cha," who advises, "Don't do anything extreme.... Be nice to your body, and you will have a nice body." This unpredictable tale of vengeance shrewdly satirizes body-consciousness. Ages 8-13.