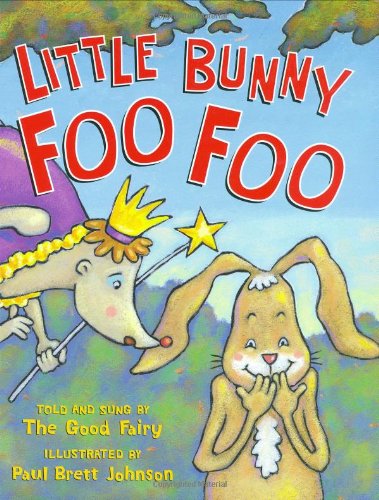 In this escalating tale of misbehavior, based on a children's song, Little Bunny Foo Foo pelts woodland animals with "yucky-mucky mud pies." He rides a red wagon and mini-motorcycle in pursuit of smaller creatures, then upgrades to a tractor and crane to chase bigger game. A rhythmic refrain names his victims: "Little Bunny Foo Foo/ Hoppin' through the forest/ Scoopin' up the field mice/ And boppin''em on the head." The delinquent's gleeful antics are observed by a pointy-nosed, outraged opossum in a gaudy purple-and-yellow tutu. This foolish-looking "good fairy" wags her finger and scolds, "Little Bunny Foo Foo/ I don't wanna see you/ Scoopin' up the field mice/ And boppin''em on the head." She gives him three chances, "or I'll turn you into a !" (The threat leaves readers understandably curious for the outcome.) Unbowed, the bratty rabbit attacks woodchucks, foxes and bears, forcing the fairy to wave her wand and leave him dressed as a circus clown. Johnson ( ), who favors rustic tricksters in the Br'er Rabbit mold, styles the impish title character as a rubbery-limbed joker while asserting that the animals get "bop[ped] on the head" with nothing worse than drippy brown mud. The opossum's wrath provides an effective buildup, but the culminating one-liner ("Hare today, goon tomorrow") ends on a humdrum note, with the mud-