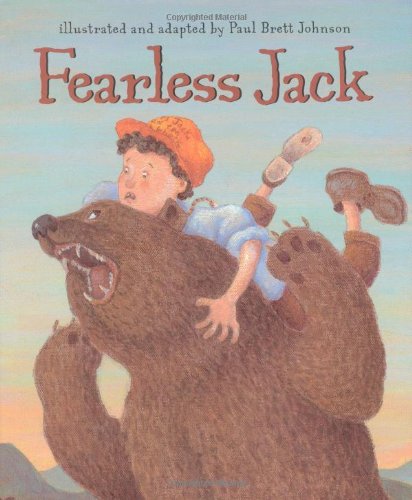 The grainy texture of acrylic on canvas lends an appropriately homespun feel to this telling of an Appalachian variant of Jack and the Giant Killer. When Jack and his ma are "down to nothing but a penny and a pot," Jack sets off to seek his fortune (or at least "a job of work"). Attacked by a swarm of yellow jackets, Jack whacks them with his cap, on which he boastfully records the results: "Fearless Jack Killed Ten at a Whack." Of course, his claim is misconstrued, and he soon finds himself hired by the sheriff to rid a nearby town of some wild varmints for "a hundred dollars cash money." Through a combination of luck and cleverness, Jack outwits first a wild boar, then a grizzly and, finally, a unicorn, which the sheriff swears "has gored about a hundred cows and nearly that many sheep and two or three old ladies to boot." Johnson's () folksy narrative style ("Jack lit out with the wild unicorn no more than a frog's hair behind") has almost as much color as the sun-dappled countryside evoked in his energetic paintings. Swiftly unfolding from a variety of perspectives, the action-packed scenes amplify the story's humor. Ages 4-8.