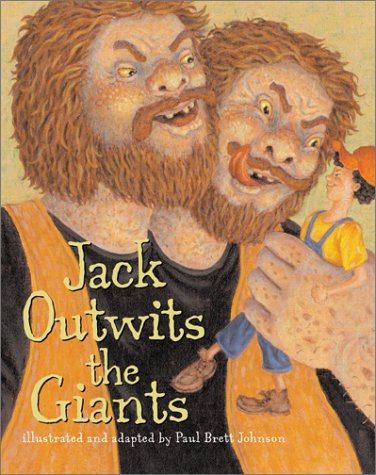 Down-home storytelling and comic pictures of silly giants enliven Johnson's () newest tale of the Appalachian boy-hero Jack. Trapped by a two-headed giant who threatens to fry him for breakfast, Jack outwits the foolish behemoth and his wife with a series of tricks, from squeezing milk from a stone (he has concealed a milkweed pod in his hand) to fibbing about a sheriff's posse that is coming to search for them ("I told you we shouldn't of eat them two deputies," the giant's wife wails. "Now we're in for it!"). Johnson's paintings make hay with the warts and snaggle-teeth of the giant's two faces ("both of 'em mud-fence ugly") as he licks his lips and tries to best the visitor introduced as "tender young Jack." The boy's trusty hound hovers in the background, his expressive face a lively barometer of the mood. The climactic illustrations show Jack convincing the two giants to hide down in the well, then kicking up "the awfullest ruckus you ever heard" to imitate the sound of the approaching posse; in the end, Jack cuts the bucket rope with a handy ax. This snappy story delivers a giant-size good time. Ages 4-8.