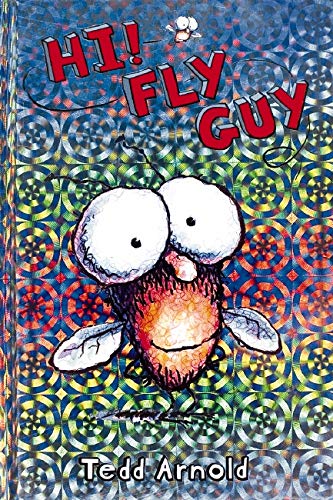 A fly went flying," opens Arnold's ( ) brief, playful tale, structured in three chapters. At the same time, "A boy went walking." The winged fellow is looking for food and the boy is searching for a critter for the upcoming Amazing Pet Show. The two equally and comically bug-eyed beings meet when the fly collides with the human hero's nose (" ") and the lad captures it in a glass jar. After the infuriated insect stomps his foot and says, " " the amazed boy replies, "You know my name! You are the smartest pet in the world!" Buzz shows his new pet, which he names Fly Guy, to his parents; his father announces that flies are pests and grabs a swatter—until the sly fly lands on Buzz's nose and calls him by name. In one of the book's funniest pictures, Fly Guy is dwarfed by the hot dog Buzz places in his jar, most of which he happily consumes. Though the pet show judges tell Buzz that flies don't qualify as pets, Fly Guy rises to the occasion and wows the judges with various feats, clinching the prize for smartest pet. Suitably wacky cartoon art accompanies the text, which is simple enough for beginning readers ready to soar to a chapter-book format. Ages 4-8.