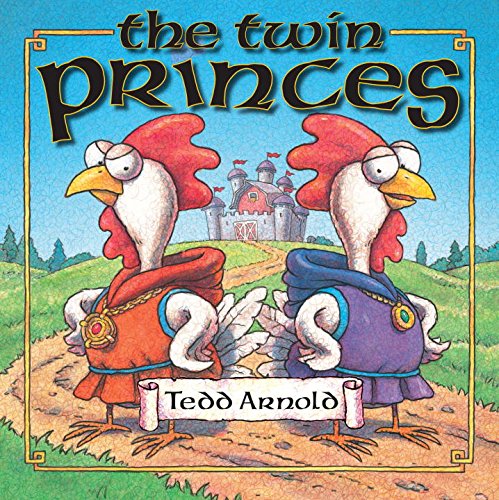 Arnold (Hi! Fly Guy) concocts a good-twin/bad-twin rivalry in this tale of rooster princes and a dispute over the royal throne. In the setup, a hen-nursemaid recalls the story to two yellow chicks, promising a riddle before its resolution. As the hen tells it, King Chanticleer is uncertain about which of his twin sons is his rightful heir. “Their mother, the queen, had died while birthing Henry and Fowler. In the confusion and grief after her death, the poor midwife lost track of which prince was born first.” Now Henry (always in a purple cape, on a white steed) and Fowler (who wears orange and rides a palomino) have come of age, though they could not have developed more differently. In the cockerels’ horse races, Fowler callously knocks down peasants in his way, yanks Henry’s cloak and sickens his brother’s horse—with henbane, of course. In a parade, friendly Henry waves his wing as sneering Fowler hoists a sword. Thus readers fear the worst when the king, injured in a worm-hunting accident, proposes a horse race to settle the inheritance matter, though he adds a last-minute twist that becomes the source of the riddle. Arnold, who amusingly imagines the castle as a combination of fortress and big red barn, plays on the chicken theme while creating real suspense. Using his signature warm watercolor palette and fizzy colored-pencil squiggles, he draws hyperbolic characters with spherical eyes, oversize yellow beaks, red combs and royal garb. In all, Arnold crafts a satisfying fairy-tale puzzle that should invite rereading for both comedy and clues. Ages 4-up. (Apr.)