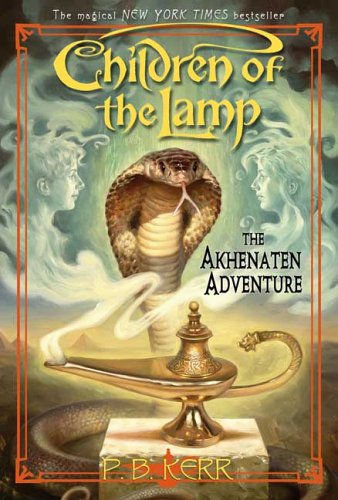 CHILDREN OF THE LAMP

In thriller writer Philip Kerr's YA debut, he puts an entertaining spin on the genie-in-a-lantern mythos, thanks to the exotic setting and a breezy and humorous delivery. Twelve-year-old John and Philippa Gaunt are "the least identical twins imaginable," at least in appearance, though they can read each other's minds. While anesthetized at the dentist, they meet their Uncle Nimrod in a hallucination; he encourages them to come to London to stay with him over the summer. Their parents agree to the plan, surprising the siblings. Before they arrive in England, strange things begin happening—a neighbor who mentions to the twins that she wishes she would win the lottery suddenly does, and a scared couple on their London-bound plane tells Philippa that they wish they were back home then promptly vanish. In his palatial home, Nimrod tells the twins that they are djinn, or "children of the lamp... the guardians of all the luck in the universe," and whisks them off to Egypt to continue their training. While in Cairo, the family encounters an explorer who claims to have discovered the key to the lost tomb of Akhenaten, which legend says contains enough trapped djinn to upset the balance of luck in the world. A breakneck paced, Indiana Jones–style adventure ensues, taking Nimrod and the twins from the heat of the Egyptian desert to the bowels of the British Museum. Kerr keeps the emphasis on fun, making this the first in a series worth watching. Ages 9-12.