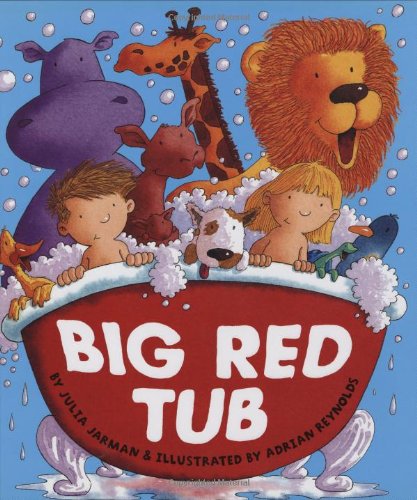 In Jarman's ( ) picture book, what starts out as a domestic comedy—two kids soak the bathroom and their dad during an especially rambunctious tub time—turns into a frothy flight of fancy. Egging each other on with cries of "I splash! You splash! Splash! Splash! Splash!," Stella and Stan certainly don't need any help spreading the wetness. But when a parade of animals shows up at the bathroom door wanting to join in, the siblings urge them one by one to climb aboard (attentive readers will note that the guests bear a striking resemblance to the children's tub toys and other animal-emblazoned belongings). The massive splashing action finally loosens the big red tub's moorings, and it sails out of the house and into outer space ("It flies twice 'round the world,/ over mountain and plain./ Till a flock of flamingos.../ ...tows it home again!" Reynolds's ( ) literally and figuratively buoyant pictures make the most of the saturated silliness. His cartooned menagerie exudes an eager mischievousness, while his gleefully rendered bubbles, splashes and spills may well induce a tidal wave of preschooler giggles. Ages 3-5.