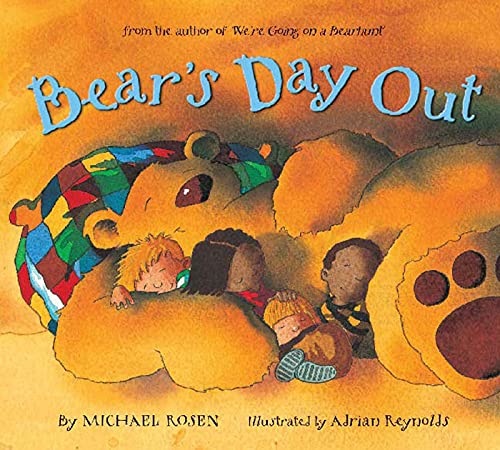 As in his , Rosen winningly invites audience participation, and yet the beguiling watercolors share at least equal credit for this book's charm. The story concerns a soulful bear who lives alone in a cave until he decides to venture to the city. Reynolds ( ) depicts the bear as a lovable oversize teddy with an extraordinarily expressive face, while the illustrator's cityscapes are as chock-full of movement, color and people as the puzzled bear can handle. As with the familiar camp tale about the lion hunt, Rosen's repeated audience responses can be infectious (“Past the cars./ Whooshy whoosh/ Whooshy whoosh/ Whooshy whooshy whoosh/ On the train./ Chuffy chuff./ Chuffy chuff./ Chuffy chuffity chuff”). However, because every line of the bear's narrative is followed by a response (“I ran to the park./ To the park?/ To the park!/ I sat on a swing./ On a swing?/ On a swing!”), the format occasionally constrains the movement of the story. Reynolds varies the layout with close-ups and pages split into panels, and the bright primary colors contrast with dramatic illustrations of silhouetted children and bear crossing a bridge or dancing joyfully in the cool light of the moon. Readers (or viewer/listeners) will be hooked. Ages 4-8.