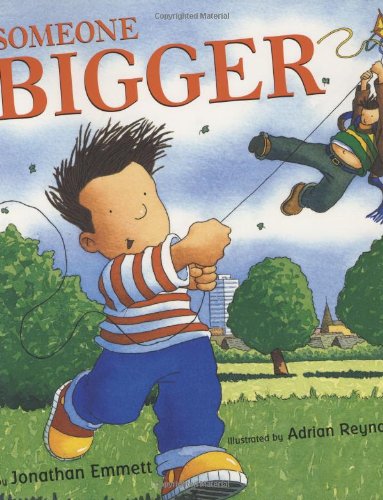 In Emmett's ( ) winning fable about competence and confidence, young Sam believes he's old enough to take the reins of his new kite, which Reynolds ( ) depicts as larger than the young hero (and nearly as large as Dad). "No, you're too small!" says Dad. " kite needs someone bigger." Then the wind kicks up, and the father finds himself flying. Several other adults ("a postman with a sack of mail,/ a bank robber, escaped from jail...," a bride, her groom, etc.) plus some hefty critters try to pull the kite down, only to be taken aloft. "Can I hold it now?/ .../ I'm old enough—/ I know I am!" Sam asks each time another victim ascends. "No, you're too small!" comes the refrain. "This kite needs someone bigger!" Reynolds's fine black line limns strong, crisp shapes and his saturated watercolors make a wonderful foil for the improbable aerodynamics. Because the pictures never cross over into cartoonishness, the focus remains on the earthbound Sam and his determination to prove his mastery. Finally, when Sam is the only one not airborne, he grabs the string "and even though he wound and wound,/ his feet stayed firmly on the ground." With everyone returned to terra firma, Emmett and Reynolds offer satisfaction to young readers on two counts—Sam not only gets his moment of triumph, he also gets to say, "told you so." Age 4-7.