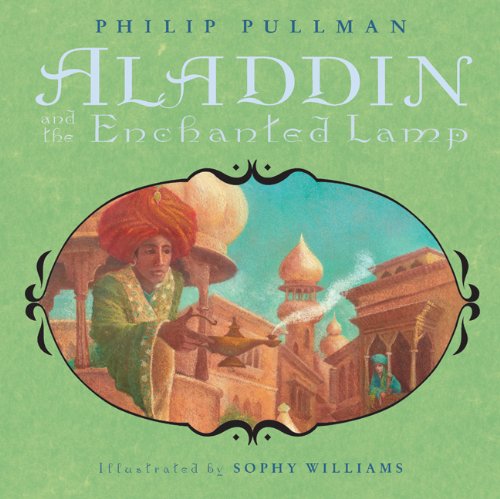 ALADDIN AND THE ENCHANTED LAMP

As lavishly ornamented as a sultan's palace, this sumptuous picture book retains the essence of the original Arabian story while updating the language and plot enough to suit modern readers. The words seem exotic without being too ornate, and the book's generous white-bordered pages complement the silver ornamentation of the jacket to announce its gift book status. Pullman (the His Dark Materials trilogy) streamlines the plot, and unlike the Disney animated film, centers his story on Aladdin, minimizing the role of the mysterious jinnee. Pullman's otherwise brisk retelling occasionally lingers lovingly over the enchanting details he invents. He describes the magic garden with its imprisoned imp in a glass bottle, its "butterfly with a human face tethered by a golden chain no thicker than a hair, and dozens of other wonders." While Pullman's narrative sets the story in China (as does the original), Williams's ( ) paintings focus instead on dreamy, Middle-Eastern caricatures of the villainous Moor, the princess's harem-like bedroom and radish-shaped palaces. Still, there's plenty of humor and wordplay for adults as well as children, including Pullman's mention of the supposed narrator Aladdin hires to write his story ("Blessed be Aladdin, Prince of Publishers! May every poor writer of stories find a patron as generous and wise!"). An excellent introduction to the Aladdin lore, and a pithy parable as well. Ages 7-10.