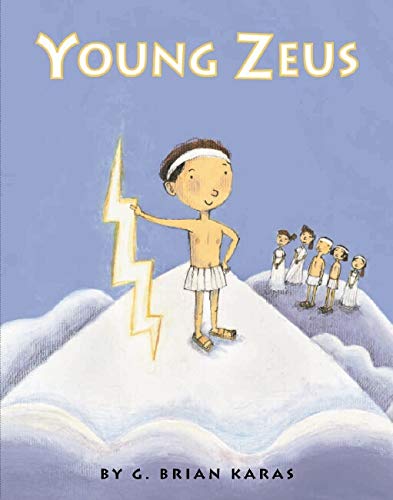 Karas ( ) opens this spirited embellishment of Zeus's little-documented boyhood with an author's note explaining that he drew from early accounts of the Greek gods and “true to the nature of myths, imagined the rest.” Fans of Greek mythology will be familiar with the details of Zeus's childhood on Crete in the care of the enchanted goat, Amaltheia, hidden from his father, Cronus, who has swallowed his siblings. But Karas's imagination serves him well in making Zeus a relatable character (Zeus's motivation for rescuing the other gods is to be able to “play with my brothers and sisters”). Droll dialogue and asides mitigate the tale's dark undertones: after Zeus frees his siblings (who look “surprisingly good” for having been eaten whole), they bicker about who's boss, and a hungry dragon asks Zeus if he's “a sweet meaty treat.” Energetic, airy gouache and pencil cartoons playfully skew scale and also keep the tone light, as when the diminutive young gods pounce on gigantic Cronus (“Take that!”) before throwing him into the sea, and thunderbolt-hurling Zeus dispenses with the mammoth Titans. Ages 4–8.