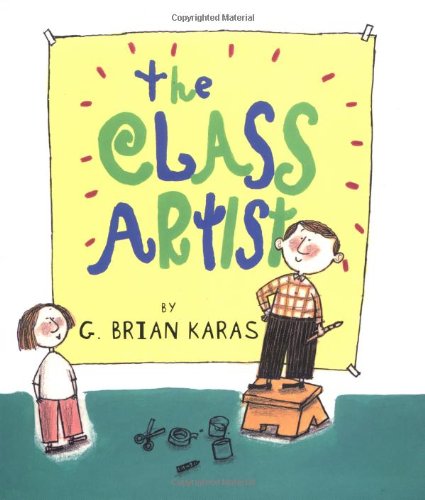 According to the flap copy, Karas's () own elementary-school experience with a difficult art project inspired this tale, which portrays a classroom episode that many readers will recognize. From the start, the narrative has a real-life ring. The story opens after his first day of school, as a frustrated Fred tells his older sister, Martha, "Everyone says I can't even draw a straight line." When she asks, "Who's everyone?" Fred replies, "Frances," referring to the class noodge. Though Martha gives her sibling a quick drawing lesson that boosts his confidence, his teacher then assigns an art project that stymies him. Fred repeatedly bungles the ambitious project he tackles—to create a life-size tipi—and has nothing to show the class on the day the assignment is due. "I give up being an artist," announces the discouraged lad; the accompanying illustration shows him enveloped by darkness, a black cloud over his head. When his teacher suggests that he draw a picture of how he feels, the boy draws the black cloud over his tipi, which spurs a series of pictures that form a pastoral mural. His masterpiece impresses all of his peers (even Frances) and earns him the label specified in the book's title. Stylized, cartoon-like art and some creative arrangement of type keep the mood light. With understatement and subtle humor, Karas neatly delivers a lesson on perseverance and the importance of believing in one's abilities. Ages 5-up.