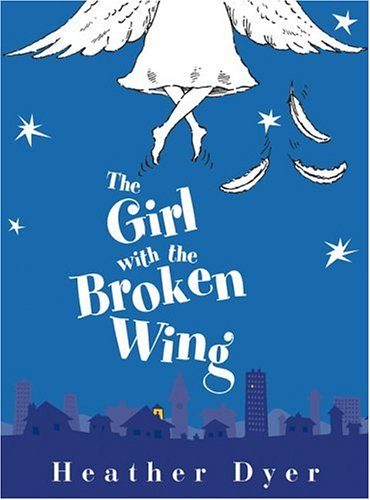 The Girl with the Broken Wing

In Dyer's , a boy living in a seaside hotel hides the identity of a young mermaid. In this engaging if less resonant tale, twins Amanda and James take an angel, well, under their wing and keep her otherworldly secret hidden (with the help of an oversize duffle coat). The day after Hilary arrives at the siblings' window and announces that she thinks her wing is broken, logical James and imaginative Amanda conduct an amusing conversation about whether or not the winged girl could be in fact an angel. James argues that angels don't exist ("If they did, you'd see them on the news") and Amanda speculates that Hilary is of the guardian variety ("They're the ones who get sent to Earth to help people"). The impulsive, energetic angel proves hard to restrain—broken wing or not: she tags along on a family picnic, causes a ruckus on a class field trip and, in the story's most comical scenario, steals the show when she usurps the role of the student cast as the angel Gabriel in the school Nativity play, sending sheep and shepherds shrieking offstage. Bailey (who also illustrated ) once again illustrates the animated goings-on in cheery pen-and-inks that effectively depict Hilary straddling both land and skies. Appealing characters and Hilary's parting gift will give kids reason to smile (the angel's rebus farewell note hints at her return). Ages 7-10.