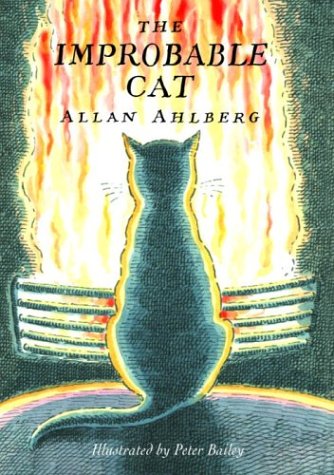 Davy, the narrator of Ahlberg's ( ) curious, dark tale tells of an event that occurred when he was 12, "something crazy—impossible—horrific." He describes how his father, mother and sister become "besotted" with a kitten that limps onto their lawn. In no time at all, the boy notices peculiar goings-on. The new pet grows from a feline that fits into a flowerpot into a cat of monstrous proportions. His mother abandons her activism work, behaves "like a zombie" and takes up smoking. His normally nattily dressed father now looks scruffy and begins drinking sherry. His sister sits on the sofa, patting the cat, her face flushed, "her eyes heavy and glazed." Spellbound, all three cater to this TV-obsessed cat's every whim as the house grows increasingly gloomy ("A kind of gauze hung over things") and Davy begins to suspect that the hypnotic pet is "a dangerous creature." The tale's violent denouement involves a cat-and-dog showdown during which the house catches fire, and the cat hurls itself through a window and is hit by a lorry (it lay "crushed and mangled, flattened between a giant tanker and the Co-op Bakery wall)." Sprinkled with Briticisms, the narrative features some snappy writing, and cross-hatch pen-and-inks nicely dramatize the enigmatic developments. Yet this oddly inconclusive and eerie novel may bewilder readers more than entertain them. Ages 10-up.