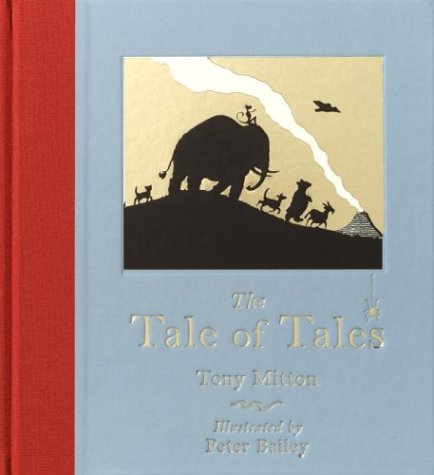 THE TALE OF TALES

With bold black-and-white silhouettes and sprightly verse settings of old tales, Mitton and Bailey (previously paired for ) produce a book that looks and reads much like a treasure from grandmother's attic. When Monkey overhears that the Tale of Tales is to be told in Volcano Valley, he sets off, and convinces the jungle animals he encounters to attend the momentous event with him. He doesn't know much about the Tale of Tales (and neither do readers; the story ends abruptly, the moment before it's told) but that doesn't dampen his excitement. "Are you coming?" he says to his first recruit, Elephant. "Go on. Think of it. The Tale of Tales." Traveling along the Story Road, each animal who joins the procession contributes a yarn. Many, like "Rip Van Winkle," "Five Men and the Elephant" (here titled "The Obstacle") and "Anansi Meets Big Snake," are old favorites. Mitton's rhythmic lines give them extra kick: "And Ali looked on in amazement/ as the bag seemed to billow and swell./ It gobbled the men and their weapons, and then/ it golloped the horses as well." For the animals' tales-within-tales, Bailey switches from silhouettes to engaging ink drawings with etching-style shading. While mysterious mention of a Tale of Tales which never materializes may frustrate younger readers especially, Bailey's striking illustrations will invite repeated viewings, and older readers will enjoy working through the whole narrative frame. Ages 5-12.