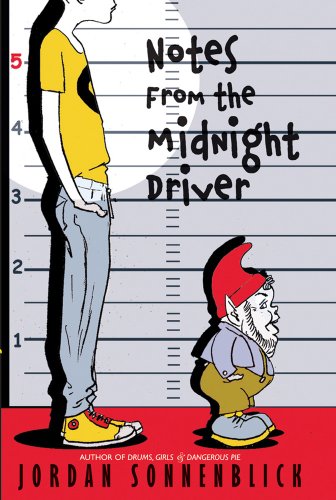 Notes from the Midnight Driver

Sonnenblick revisits several key themes from his debut novel, , to even greater effect here. Narrator Alex Gregory starts off by describing his maiden drinking episode: getting drunk alone, hijacking his mother's car in order to drive to his father's house and give the man a piece of his mind (his parents are separated), and taking an unplanned detour into a neighbor's yard, destroying a lawn gnome. What begins as humor takes on darker implications as the book progresses. Not because Alex has a drinking problem (he never takes another sip in the course of the book), but because of a drunk driver's impact on Sol Lewis, the resident of a nursing home to whom Alex is assigned by Judge J. Trent as part of his community service for his crime. Like Steven's Annette in , Alex's female best friend, Laurie, sticks by him throughout this challenging time. And Sol, who starts out crotchety, turns out to be much wiser below the surface, and far more complicated. He even suggests to Alex that there may be more to the teen's relationship with Laurie than friendship. The bond that guitar-playing forges between Alex and Sol serves not only to make them peers musically, but also personally, allowing Sol to reveal his own past. While readers may figure out the significance of Alex's judge to the broader story before the hero does, they will likely find the ending no less satisfying. Ages 12-up.