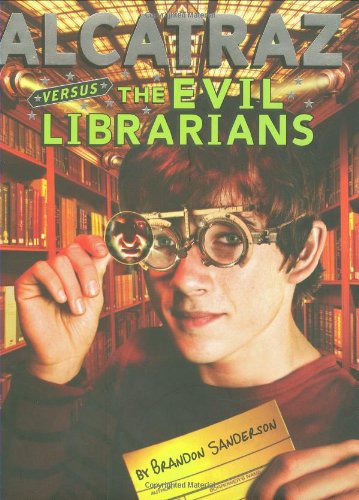 In Sanderson’s ( ) children’s debut, an over-the-top fantasy/adventure, librarians are evil because they control all the information in Hushland (America). They distort some facts and fabricate the rest. Alcatraz, meanwhile, is the name of the protagonist, who has been raised in a series of foster homes. As the novel opens, on his 13th birthday, he is quickly initiated into the true nature of librarians by his heretofore unmet grandfather, Leavenworth Smedry. Before long, Sanderson brings on talking dinosaurs (it’s a librarian distortion that they’re extinct), a parallel world, visiting villains and more. The madcap plot can seem chaotic, with action pulling Alcatraz toward new characters at a breakneck speed, but Sanderson unexpectedly draws everything together in an extravagantly silly climax. Readers whose sense of humor runs toward the subversive will be instantly captivated: not only does the author poke fun at librarians, he lampoons books (including this one) in frequent passages directly addressed to readers: “You are saying to yourself, 'The story just lost me. It degenerated into pure silliness…. I’m going to go read a book about a boy whose dog gets killed by his mother. Twice.’” Like Lemony Snicket and superhero comics rolled into one (and then revved up on steroids), this nutty novel isn’t for everyone, but it’s also sure to win passionate fans. Ages 9-up.