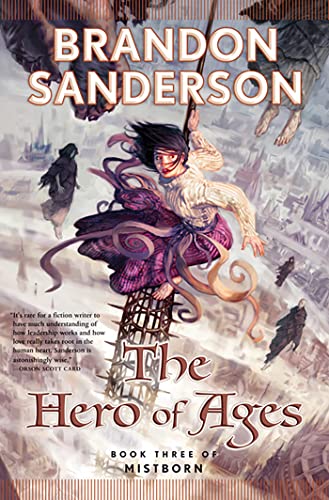 The Hero of Ages

This adventure brings the Mistborn epic fantasy trilogy (after 2007's ) to a dramatic and surprising climax. Tricked into releasing the evil spirit Ruin while attempting to close the Well of Ascension, new emperor Elend Venture and his wife, the assassin Vin, are now hard-pressed to save the world from Ruin's deadly Inquisitors, the insidious lethal mists called the Deepness and the increasingly heavy falls of black ash that threaten to bury the land and starve its inhabitants. As the duo search for the last of the former emperor's cache of atium, source of the strongest Mistborn energies, they battle Ruin's forces as well as monsters and prophetic powers. Sanderson's saga of consequences offers complex characters and a compelling plot, asking hard questions about loyalty, faith and responsibility.