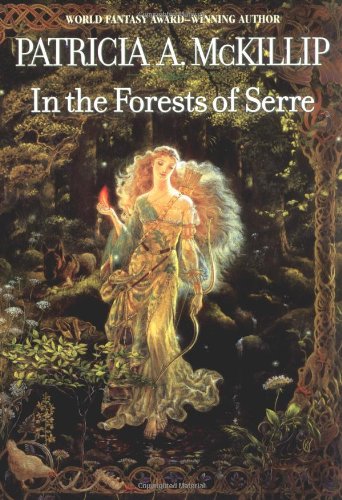 IN THE FORESTS OF SERRE

In a twist on the Biblical adage "Where your treasure is, there will your heart be also," McKillip () presents a mystical, eerie fantasy about the flight from love—and the haphazard progress toward love. The efforts of a kingdom to prevent war by sacrificing its princess, Sidonie, to a loveless marriage are complicated by the refusal of the intended bridegroom, Prince Ronan of Serre, to cooperate. Sidonie obeys to save her country from sure destruction. Ronan flees from his fate with the magical interference of the Forests of Serre, the mysterious witch Brume and a firebird whose song becomes a pied piper–like enchantment. Meetings with Brume exact a dear price, and nearly every character encounters her at some point. To some, Brume can be death itself; others merely have to give her something of great value. Ronan offers "what of all such things he valued least, and would not miss if he did not return for it. 'Take my heart.'" And indeed, Brume does take his heart. Ronan doesn't seem to miss what he felt he lacked to begin with, but Sidonie does, and so do his parents. This novel is similar in style and content to McKillip's World Fantasy Award–winning story, "The Forgotten Beasts of Eld," which is not to say it's a rehash. A skillfully told adult fairy tale, it stands perfectly well on its own.