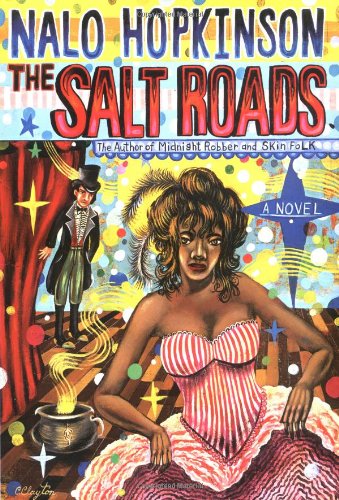 Whirling with witchcraft and sensuality, this latest novel by Hopkinson () is a globe-spanning, time-traveling spiritual odyssey. When three Caribbean slave women, led by dignified doctress Mer, assemble to bury a stillborn baby on the island of Saint Domingue (just before it is renamed Haiti in 1804), Ezili, the Afro-Caribbean goddess of love and sex, is called up by their prayers and lamentations. Drawing from the deceased infant's "unused vitality," Ezili inhabits the bodies of a number of women who, despite their remoteness from each other in time and space, are bound to each other by salt—be it the salt of tears or the salt that baptized slaves into an alien religion. The goddess's most frequent vehicle is Jeanne Duval, a 19th-century mulatto French entertainer who has a long-running affair with bohemian poet Charles Baudelaire. There is also fourth-century Nubian prostitute Meritet, who leaves a house of ill repute to follow a horde of sailors, but finds religion and a call to sainthood. Meanwhile, the seed of revolution is planted in Saint Domingue as the slaves hatch a plan to bring down their white masters. Ezili yearns to break free from Jeanne's body to act elsewhere, but can do so only when Jeanne, now infected with syphilis, is deep in dreams. Fearing that she will disappear when death finally calls Jeanne, Ezili is drawn into the body of Mer at a cataclysmic moment and is just as quickly tossed back into other narratives. Though occasionally overwrought, the novel has a genuine vitality and generosity. Epic and frenetic, it traces the physical and spiritual ties that bind its characters to each other and to the earth.