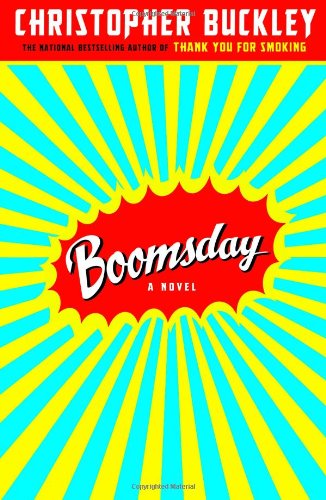 It's the end of the world as we know it, especially if bloggers are setting the national agenda. In his latest novel, Buckley imagines a not-so-distant future when America teeters on the brink of economic disaster as the baby boomers start retiring. Buckley takes on such pressing (however boring) topics as Social Security reform and fiscal solvency, as does his protagonist. And get this: she's a blogger.

Buckley's heroine is "a morally superior twenty-nine-year-old PR chick" who blogs at night about the impending Boomsday budget crisis. Of course, "she was young, she was pretty, she was blonde, she had something to say." She has a large, doting audience that eagerly awaits her every blog entry. And her name? Cassandra. And the name of her blog? Also Cassandra. Of course, Buckley doesn't let his allusion get by us:

"She was a goddess of something," another character struggles to remember, which gives his heroine the opportunity to educate us about the significance of her namesake.

"Daughter of the king of Troy. She warned that the city would fall to the Greeks," she explains. "Cassandra is sort of a metaphor for catastrophe prediction. This is me. It's what I do."

So Cassandra, doing what she does, starts by calling for "an economic Bastille Day" and her minions take to destroying golf courses in protest. Cassandra grabs headlines and magazine covers, and the president starts wringing his hands over what she might blog about next. Her follow-up: a radical but tantalizingly expedient solution to that most vexing of issues, the Social Security problem—Cassandra proposes that senior citizens kill themselves in exchange for tax breaks.

Buckley, author of , shows great imagination as he fires his pistol at the feet of his straw women and men. In 300-plus pages, though, it would be nice if he had found a way to endear us to at least one of his characters. Yes, we know that Washington is "an asshole-rich environment," as one puts it, but some Tom Wolfe–style self-loathing might be good for characters who use the word touché.

Full disclosure: I'm a blogger of Cassandra's generation, and at times the totally over-the-top, relentlessly us-against-them scenario reminded me that I was reading a book written by someone of the blogging generation, someone who Cassandra would want put down. Oh, the irony in these generationalist feelings. Then again, maybe that's exactly Buckley's point.

Jessica Cutler is the author of The Washingtonienne.