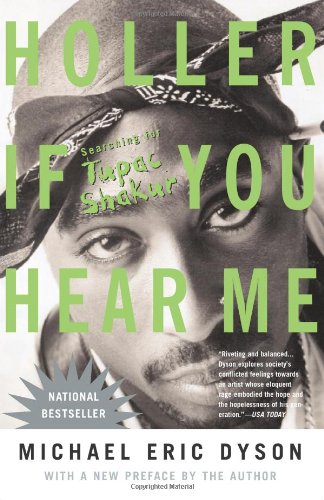 HOLLER IF YOU HEAR ME: Searching for Tupac Shakur

A poor, urban, high school dropout and book-devouring autodidact who'd quote Shakespeare in conversation, Shakur would also sing along to Sarah McLachlan. Dyson (), a Baptist minister, reveals the complexity of Shakur and shows why—even five years after his death—his records, poetry and films continue to sell. "He was not hip-hop's most gifted emcee. Still, Shakur may be the most influential and compelling rapper of them all," writes Dyson. "He was more than the sum of his artistic parts." Complementing Dyson's articulate perspectives on the short life and extraordinary impact of the icon are his emotive interviews with writer Toni Morrison, actress Jada Pinkett Smith (Shakur proposed to her, but was turned down), rapper Mos Def and more than a dozen others. Most striking are the conversations about and with Shakur's beloved mother, a former Black Panther and ex-crack addict. Dyson uses themes in Shakur's raps to examine the larger ills of hip-hop culture—such as misogyny and the new hostility between youths and elders—without neglecting the rapper's positive acts and intentions. Shakur wanted to "combat the anti-intellectualism of hip-hop," Dyson persuasively writes.