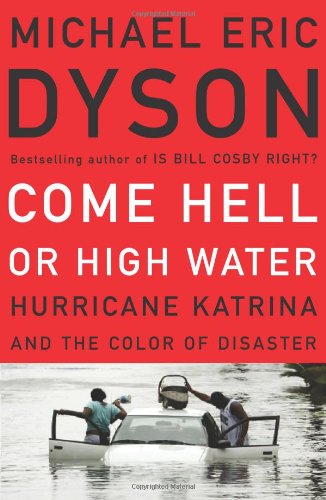 Come Hell or High Water: Hurricane Katrina and the Color of Disaster

The first major book to be released about Hurricane Katrina, Dyson's volume not only chronicles what happened when, it also argues that the nation's failure to offer timely aid to Katrina's victims indicates deeper problems in race and class relations. Dyson's time lines will surely be disputed, his indictments of specific New Orleans failures defended or whitewashed. But these points are secondary. More important are the larger questions Dyson ( , etc.) poses, such as "What do politicians sold on the idea of limited governance offer to folk who need, and deserve, the government to come to their aid?" "Does George Bush care about black people?" and "Do well-off black people care about poor black people?" With its abundance of buzz-worthy coinages, like "Aframnesia" and "Afristocracy," Dyson's populist style sometimes gets too cute. But his contention that Katrina exposed a dominant culture pervaded not only by "active malice" toward poor blacks but also by a long history of "passive indifference" to their problems is both powerful and unsettling. Through this history of neglect, Dyson suggests, America has broken its social contract with poor blacks who, since Emancipation, have assumed that government will protect its citizens. Yet when disaster struck the poor, the cavalry arrived four days late.