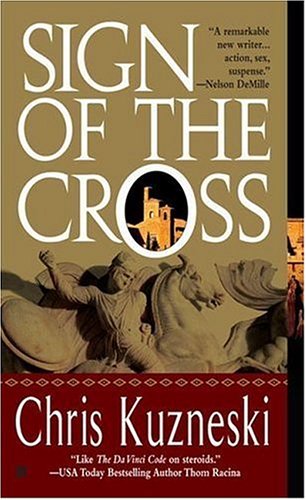 Kuzneski elbows his way into the overcrowded field of the papal thriller with his sophomore effort (after 2002's racially charged ), combining the requisite plot twists and -esque secret histories with a -like attention to gore. And there's plenty of opportunity for gore: Kuzneski kicks off the action with a nasty crucifixion in modern-day Denmark. It turns out the victim is a Vatican priest, and his murder is just the first. Meanwhile, maverick archeologist Dr. Charles Boyd and his assistant Maria Pelati discover a 2000-year-old scroll underneath the Italian town of Orvieto that contains "a secret that would change... the history of the world—forever." Instantly, the two become the most wanted people in Europe, pursued by the Vatican, a large measure of Western European law enforcement and two freelance CIA agents. As the chase begins, more crucified priests are turning up across the globe, and the head of Interpol's new homicide division, Nick Dial, finds himself edging closer to the heart of a centuries-old coverup. Cat and mouse games accelerate and alliances shuffle as the overstuffed plot brings its numerous players together, but excessive detail and exposition-heavy dialogue slow the action. Despite its flaws, Kuzneski knows what fans of the genre want: compelling and well-researched history, high-tech 21st-century sleuthing and a lot of action.