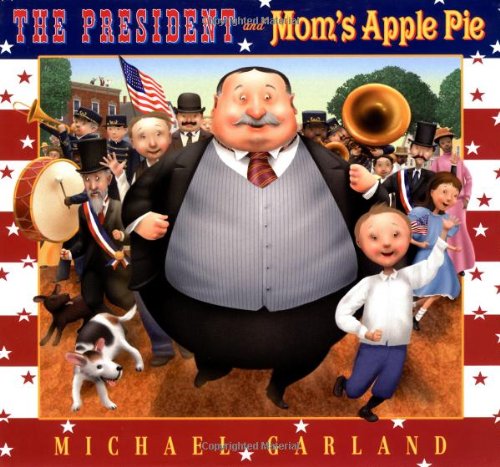 THE PRESIDENT AND MOM'S APPLE PIE

Garland's () brightly stylized computer artwork makes fitting accompaniment to this campy but agreeable yarn about President William Howard Taft. Made up out of whole cloth (but inspired by the leader's penchant for getting out and about the country), the story imagines him pausing on a 1909 whistle-stop tour to dedicate a small town's flagpole. But the portly president gets sidetracked. "What is that wonderful aroma?" he asks, and the obliging lad of a narrator whisks him off on a culinary (and somewhat modern multi-ethnic) tour of the town, first to Tony's Italian Villa for spaghetti, then Big Ed's Barbecue for ribs, on to Mrs. Wong's Hunan Palace and, finally, to his own back yard, where the "wonderful aroma," it turns out, emanates from the narrator's mother's apple pie, cooling on the windowsill. Garland pictures the 300-plus-pound Taft as a beach ball of a fellow with tiny limbs and an appetite of truly presidential proportions. One particularly humorous spread shows the rotund but nimble "Big Bill" racing down a residential street in pursuit of the aromatic treat, well ahead of a pack of townsfolk. The clean lines, slightly flattened perspectives and uniform features produced by the computer graphics accentuate the comic absurdity of the material, while the setting, wreathed in such classic Americana as flags, a brass band and straw boaters, radiates nostalgia. Ages 3-8.