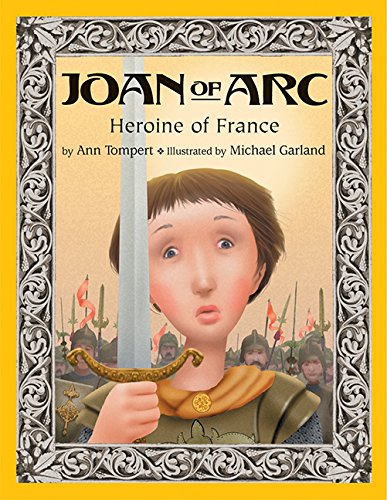 JOAN OF ARC: Heroine of France

Tompert and Garland (previously partnered for and ) aim high in attempting to introduce children as young as kindergartners to one of European history's most perplexing heroines; unfortunately, they miss their mark. Reporting the known facts about Joan of Arc, Tompert takes a historical view (rather than, for example, the spiritual approach of Josephine Poole and Angela Barrett's ). She quotes Joan liberally, matter-of-factly sprinkling adaptations of Joan's words throughout the text as if sharing the responses from an interview. However, she supplies only the barest political context, and the target audience may have trouble understanding why France and England are at war, much less why the Burgundians side with the English. The author sidesteps the mystery of Joan's voices by citing and paraphrasing Joan without analysis or comment (" 'I was in my father's garden. There appeared a great light around me.' In the light she saw a vision of Michael the Archangel, who told her to go to the aid of the King of France"). Garland's digital illustrations blend mostly flat, postmodern perspectives with photo-collage elements and a spectrum of styles, from painterly to folk-like to the almost puckish characterizations of his or . Despite their references to period architecture, they suggest a fantasy realm that drains the account of its historical and tragic human dimensions. For a picture book that does justice to the complexities of Joan's story, see Diane Stanley's . Ages 5-up.