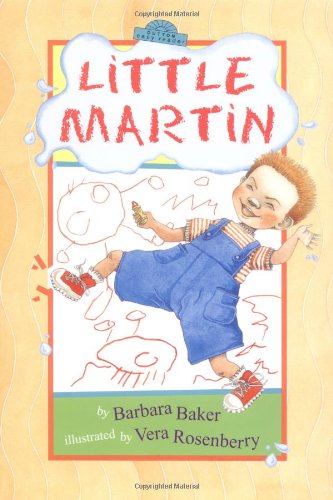 In this volume, designed as a beginning reader, the five vignettes about a toddler may not hold the attention of children old enough to read on their own. Martin, a contrary preschooler whose vocabulary is largely limited to "no" and "mine," displays a grating habit of ordering around his too-patient mother. He refuses to eat his egg at breakfast, will not share his toys at the playground, sprays his mother as she holds him up to the water fountain, and joins forces with a preschool neighbor girl to make a grand mess (of themselves and Martin's room) with her mother's lipstick. As indisputably credible as the episodes may be, their star remains unappealing; Martin comes across as spoiled and tiresome. Readers may recognize younger siblings' behavior in that of this recalcitrant youngster, but—ironically—he may be as likely to annoy them as are their real-life brothers and sisters. Though occasionally portraying Martin striking a comical pose, Rosenberry's illustrations do little to endear readers to the star of this show. Ages 5-8.