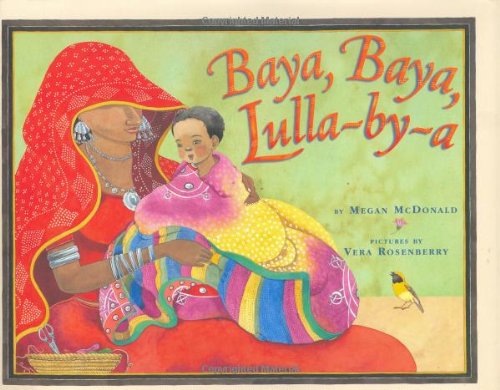 McDonald's () lilting poem tells parallel stories about a mother baya bird weaving a nest "strand/ by strand/ by willowy strand" and an Indian mother weaving a safekeeping blanket "thread/ by thread/ by whispering thread." McDonald's languorous and graceful text flows with satisfying imagery. The mother carries her baby "heartbeat to heartbeat,/ through the pale green/ haze of desert," and "she sings to you morning after morning,/ like a sleepy cricket./ ./ Your heart answers, a small drum./ ." The rhythmic repetition of Indian words lends a peaceful, somnolent tone to the narrative (the words are translated in an appendix). After the two stories merge and baya bird helps save the baby from a cobra, however, the narrative meanders between lullaby and story, and loses some of its effectiveness. Rosenberry's () framed watercolors in jewel-like colors recall the stylized perspectives and, occasionally, the motifs of Hindi paintings. The portraits are not always consistent in their portrayal of the characters, but the landscapes and the textiles are intricately detailed. One painting, which invites comparison of the elaborate designs of the mother's scarves with the stars of the night sky, presents the mother almost like a goddess, with four arms: she tends the baby while at the same time plucking the moon from the sky and presenting a yellow garland to the bird. This cross-cultural venture will delight the ear—and intrigue young readers with its exotic introduction to the customs of another country. Ages 3-6.