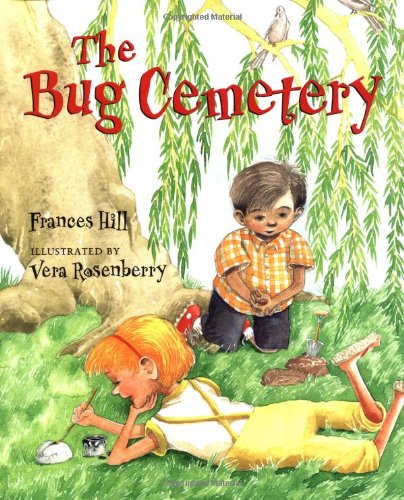 Children's fascination with and fear of death gets a funny and ultimately empathic treatment from first-time author Hill. The matter-of-fact text, as narrated by a boy, shares the tone of Margaret Wise Brown's : "When I found a dead ladybug one day, my sister, Wilma, buried it for me. She painted a rock to use as a tombstone." Mock funerals for insects then become the new neighborhood fad: "Wilma started charging a dime to bury someone's dead bug. Billy opened a lemonade stand for thirsty mourners.... Soon we had a bug cemetery in our backyard." But when a car kills Billy's cat, Buster, the children confront a sobering reality, and the precocious irony that has crept into the boy's narration vanishes, replaced by a heartfelt plainspokenness: "Funerals aren't any fun when they're for someone you love." The children transform the bug cemetery into a garden and final resting place for Buster, and find comfort in the ongoing cycle of life. Rosenberry () varies her gouache illustrations between single-page and double-spread formats to give the book a compelling visual pace. The children's elfin facial features and the masque-like compositions take on a slightly gothic appearance, appropriate to the play-acting and, eventually, the sorrow. The artist captures the psychological subtleties of a tricky subject, and every page feels real—whether Wilma and her friends are feigning grief or genuinely experiencing it. Ages 4-7.