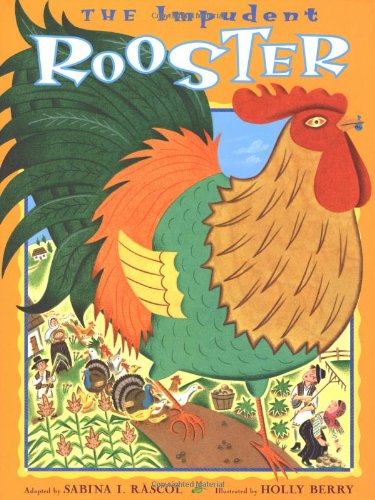 Good triumphs over greed in Rascol's debut book, a buoyant retelling of a Romanian folk tale about a rewarding reversal of fortune. Weak from hunger, an impoverished old man chastises his beloved rooster for not being a hen that can lay eggs. Crestfallen, the pet takes to the road, where he finds a purse containing several pennies. Alas, a greedy nobleman "who had amassed his wealth by wronging others" spies the rooster and tells his coachman to snatch the purse. The plucky pullet pursues the thief, who pitches the rooster down a well, tosses him into a blazing oven, locks the fowl into his overflowing money room and throws him into the middle of a herd of cattle. Each time, the clever crower outwits his would-be captor and—now as "big as a hill" after swallowing much of the villain's stash of coins and his herd—finally gets what he wants. Followed by the nobleman's entire flock of admiring poultry, the victorious hero proudly trots home and gives all of his accumulated wealth to his master, who in turn shares his bounty with the poor. Berry ( ) captures the tale's energy and comical goings-on in bustling, vividly hued pictures inspired by Romanian folk art. Her depiction of the rooster's increasing girth, along with the plot's effective repetition and upbeat finale, make this a peppy pick for reading aloud. Kids will happily crow along. Ages 4-8.