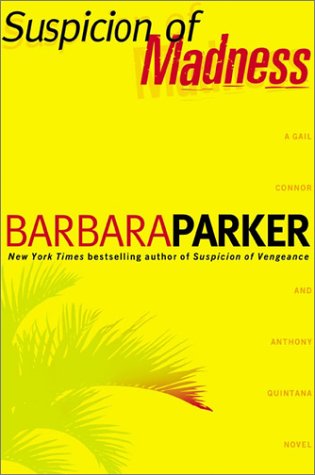 Miami lawyers Gail Connor and Anthony Quintana head to Key West for a combined romantic vacation and murder investigation in the seventh of Parker's Suspicion series (, etc.). As in previous installments, the pressures of the chase test the relationship of the high-powered couple, and Florida's lush landscape adds color to a mystery that makes up in intensity what it lacks in depth. It all begins when wealthy client Martin Greenwald invites Quintana to his resort in the Florida Keys to help his troubled stepson, Billy, who is under suspicion for murder. Certain Billy is innocent, Quintana convinces Connor to join him to share the delights of the island. But they find little time for amusement because as soon as they arrive, they learn Billy has attempted suicide. In quick order, lies and bodies are uncovered, and Connor and Quintana find themselves investigating an aging B-movie starlet, a pair of conniving local lawyers, the client's overextended family and a stuttering handyman who does odd jobs, showing up in the oddest places at the oddest times. The intertwining lives of the characters reflect the Florida culture around them—rich in dreaming, scheming and explosive undercurrents. The surprise ending is no surprise for Hitchcock fans, but former state prosecutor and practicing attorney Parker paces her story well and neatly ties up loose ends. She also heats up the legal intrigue with the fiery romance between Latin lover Quintana and single mom Connor, ensuring that fans—even those who have seen the same movies Parker has—will stay tuned for the next escapade of Miami's tempestuous legal sweethearts.