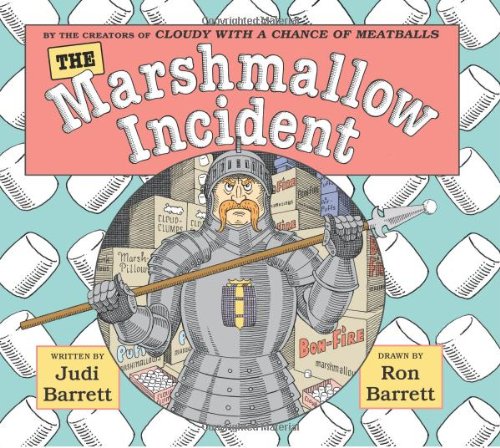 The rival towns of Left and Right provide the fanciful medieval setting of this middling fable by the creators of . Recalling etchings, Ron Barrett's pen-and-ink art humorously depicts the towns' separatist stances (“We proudly serve leftovers” announces a sign at Lefty's restaurant, while the words on Right's clock tower, which displays only the right side of the clock face, boasts “Always the Right Time”). Mayhem erupts when someone inadvertently does the unthinkable and crosses the dotted yellow line separating the two towns. Armor-clad members of the Order of the Ambidextrous Knights of the Dotted Yellow Line begin firing the only ammunition they have: thousands of marshmallows. A knight finally “realized how silly the whole thing was” and suggests that the divisive line between the towns be wiped out, which ends the marshmallow attack—and the longstanding enmity. Many of the tale's particulars are silly indeed, and the message about respecting differences ends up getting buried beneath the fluff. Ages 3–8.