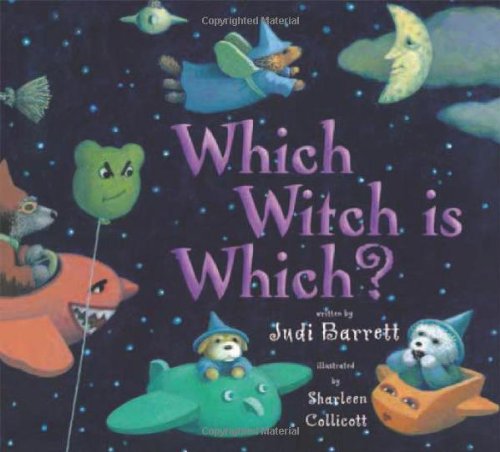 WHICH WITCH IS WHICH?

Specific questions and elaborate illustrations complicate this hide-and-seek game, whose "witches" are animals in pointed hats. Every spread presents five queries opposite a detailed full-bleed image. For instance, "Which witch looks radiantly rich?" refers to six white rabbits having tea. All wear billowy gowns, but one drips with jewels. The answer may be evident, but more questions take the investigation further. "Is it the one feeling ?" (A sweaty rabbit fans herself.) "Is it the one stirring a ?" (A rabbit in a patched hat tends a teakettle.) "Is it the one eating an ?" (The bejeweled rabbit nibbles an orange fruit.) Barrett, author of , tirelessly repeats the title's formula on each new page, rhyming the homonyms "which witch" with "itch," "switch" and "glitch." Collicott's () appropriately weird gouaches feature look-alike groups, from polar bears to newts to chameleons, in creepy swamps or decadent interiors. Her near-identical witches wear patterned garments and make subtle movements; a lion palms a gold coin in "Which witch is a sneaky snitch?" The puzzles lose their luster as they are solved, but Barrett's numerous clues and Collicott's intricate visuals delay that inevitable fading. Ages 4-8.