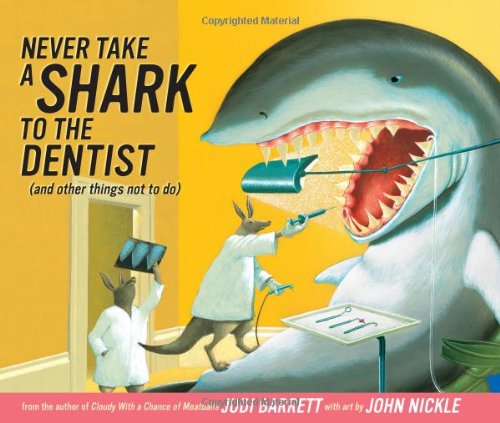 Barrett ( ) and Nickle ( ) compile a set of droll rules to live by, each recommendation reinforced by a meticulous full-page image. The hulking shark of the title, for instance, glares at the bite-size kangaroo giving him a root canal—a darkly funny vision for those who fear dentists. Sometimes the animal and insect characters exaggerate certain human dramas: two cockroaches assist a demanding customer (“Never go shopping for shoes with a centipede”) or, in the overleaf of a clever vertical gatefold, an all-rabbit crowd watches a film with a tall individual blocking the screen (“Never take a giraffe to the movies”). Barrett maintains the negative commands until the conclusion, which winks, “But always go shopping with a pelican” (a built-in tote). Nickle, working in hyper-detailed acrylics, enhances the comical phrases with surreal imagery: well-dressed wild animals with panicked expressions throw their arms in the air when a small creature walks in (“Never go to the bank with a raccoon”); a housefly features in a cheerfully creepy scene (“Never play checkers with a spider”). Kids will revel in the absurd humor. Ages 4-8.