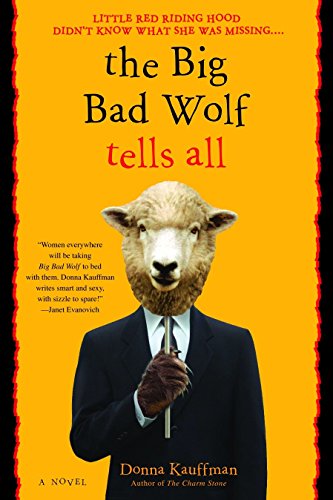 THE BIG BAD WOLF TELLS ALL

Suspense meets contemporary romantic comedy as Kauffman takes a detour from her usual historical romances () to follow a hip young alpha female in San Francisco. Tanzy Harrington writes a romance column for MainLine, "the hottest online magazine since Salon." In her column, "Tanzy Tells All," she asserts that "men can be put into two categories, wolves and sheep"; Tanzy is a fervent fan of "Wolf Sex" (practiced by single nonconformists) and determined to resist the cozy allure of "Sheep Sex" (for the marrieds), even though she's recently become "the Last Bridesmaid in a social circle filled with Till-Death-Do-Us-Parters." Her opinions set off a flurry of controversy and garner her one particularly obsessed cyberfan, SoulM8, who turns into a full-fledged stalker. Her rich great-aunt Millicent hires Riley Parrish to protect Tanzy while she house-sits at Millicent's estate during the Christmas holidays. Riley has all the outward markers of a stolid good provider, but he turns out to be the proverbial wolf in sheep's clothing. Can he tame Tanzy's wolfish heart? Tanzy and Riley have lively, likable voices, but the stalker mystery subplot never really gathers steam, and neither do Tanzy and Riley's interminable presex dialogues (though Kauffman's sizzling love scenes are almost worth the wait). Kauffman's lack of attention to vital mystery action ingredients (there's not one car chase or image of Riley really pumping those fab abs) will dismay readers searching for a new Stephanie Plum. But for those dreaming of alpha males at poolside? It might fit the bill.