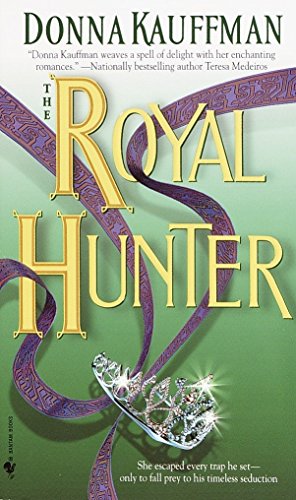 Kauffman () continues to mix fantasy, sex and touchy-feely wisdom in this breezy time-travel romance about the Royal Hunter, a 23rd-century Australian mercenary who travels to 21st-century Connecticut to fetch Eleri Trahaern, the Royal Healer. Devin Archer, a hard-boiled hottie with a chip on his shoulder, was hired by Queen Catriona as she lay dying and pregnant with the successor to the Welsh throne of Llanfair. Only Eleri can save Catriona's son, but she fled Llanfair and the century 29 years earlier to protect her unborn daughter from the royal family's enemies. With the help of Baleweg, a Yoda-like mystic, Devin steps through a triangle of time and encounters Talia, Eleri's daughter. Talia, an animal rescuer, was orphaned at the age of six, and although she's always possessed the ability to feel an animal's pain, she knows nothing about healing and very little of Llanfair. While Baleweg trains Talia to open her heart, Devin protects them from Emrys, a wizard who was cloned from Baleweg but who still hasn't learned how to play well with others. Despite Devin's reserve, he is strongly attracted to Talia, and together they learn how to embrace the power of love. Kauffman's whimsical tale stretches the bounds of the believable, but she anchors her readers with sensuality, humor and compassion.