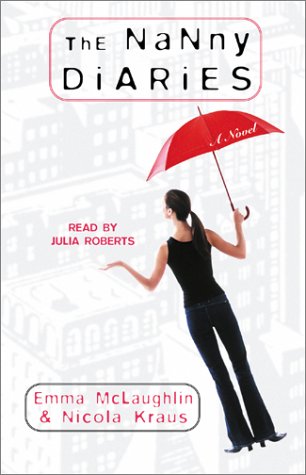 THE NANNY DIARIES: A Novel

A blistering satire based on the real-life experiences of former New York City nannies McLaughlin and Kraus, this hilarious examination of the upper echelons of Manhattan society and the unlovable Park Avenue X family is flawlessly complemented by Roberts's limber, metamorphosing vocal performance. Depicted by the Academy Award winner's detached, patronizing tone, Mrs. X, a housewife, has little more to do than spend her adulterous, workaholic husband's seven-figure salary on manicures, designer clothes and floral arrangements. She delegates the care of her bratty four-year-old son, Grayer, and other small "errands" (e.g., shopping for a 50-guest dinner party) to an NYU grad student, Nan. Highlighting the disparity between the decadent, insular world of the Xs against the underpaid, disrespected one of the hired help surrounding them works especially well in audio, as Roberts acutely captures neglected Grayer's temper tantrums, piercing whines, inconsolable cries of "I want my mommy" and the hesitant tones and broken English of his playmate's caretakers. When the babysitter's "level of commitment" to the job is questioned and a developmental consultant is called in to handle the "deleterious self-esteem adjustment" her charge may have been set up for after failing to make it into a prestigious school, Roberts conveys Nan's struggle through readings alternately sarcastic, angry and falsely cheerful. This is a witty and thoroughly enjoyable production.