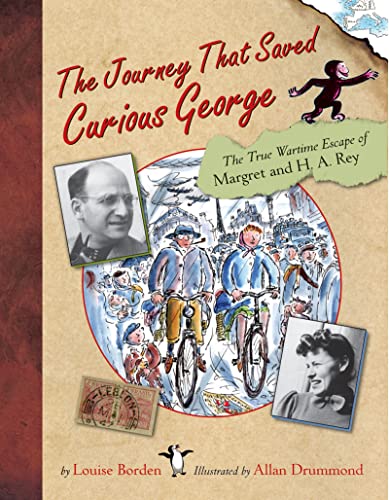 The Journey That Saved Curious George: The True Wartime Escape of Margret and H.A. Rey

The legendary tale about the Reys' 1940 flight from Paris on bicycles just before the Nazis stormed the City of Light comes into clear focus here, thanks to Borden's diligent research and lucid writing. Reproductions of Hans Rey's diary entries, letters from publishers and photos—many taken by Margret—lend the book authenticity and immediacy. Drummond's watercolors add a spirited splash of color to the handsomely designed paper-over-board volume. His illustrations display a whimsy and energy appealingly reminiscent of the Reys' art, while still uniquely his own; the artist also effectively conveys the somber side of this extraordinary story. Borden sketches the childhoods of Hans and Margret, both raised in Jewish families in Hamburg, who in 1935 teamed up professionally, and then married, in Rio de Janeiro (where, curiously and quite satisfyingly, they had two mischievous pet marmosets). The couple then moved to Paris, where they began writing and illustrating children's books, including one starring a "very little monkey" named Fifi. The details of the Reys' escape from Paris underscore the sense of urgency. Since trains had stopped running, they tried to buy bicycles, but shops were sold out, so Hans bought spare parts and built two bikes. A wordless, frenetic spread dramatizes their part in "the largest motorized evacuation in history." At last they reached America, where Fifi, too, found a home, at Houghton Mifflin—and a new name. A stirring, uplifting and elegantly packaged saga. Ages 8-12.